How to Use Cause-Effect Diagrams to Solve Problems 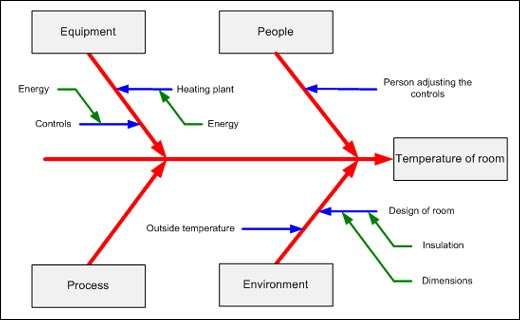 A simple tool that can be used to improve the performance of business processes–Cause-Effect Diagrams. In improving any process, there are problems to be overcome. Most of these problems come to our attention due to their symptoms and effects. In order to solve these problems, we must find the root cause of each problem and eliminate that cause.

One of the most useful tools in problem solving is Cause-Effect Diagrams that were invented in Japan in 1943 by Kaoru Ishikawa as an aid to explaining how various factors in a complex process can be sorted out and related. Cause-effect diagrams are often referred to as fishbone diagrams because of their shape or Ishikawa diagrams after their inventor.

Cause-effect diagrams are extremely useful for organizing input from a brainstorming session. Brainstorming, to be effective, should be freewheeling and without judgments. Data is developed without regard to order, relationships or relevance.

Once the data is captured, however, we need to sort it out and show the various relationships. Let’s use as a simple example:

Now let’s say that all the people affected by this situation have been gathered for a brainstorming session and have produced the following possible causes for variations in temperature:

Note that the discomfort could have been caused by variations in humidity, noise, lighting or other factors, but in this case, it is a simple problem of incorrect and/or varying temperature. Because this is true, we can focus our efforts only on the possible causes of temperature variation. To help organize the information, we will group our data into four categories; People, Equipment, Process, and Environment.

This is shown in the first of the cause-effect diagrams (Cause-Effect Fig. 1).We could have labeled our categories anything, but we used labels that work for the situation. Sometimes more than four groups are identified. No problem!

Now let’s see where our possible causes can be logically placed (Cause-Effect Fig. 2).Once we have arranged the data in this fashion, we can investigate each factor and determine if it is in control. In our example, the problem is that the occupants of the room are cold. We know the problem is not due to environmental factors because the design of the room has not changed, and the outside temperature is warmer than it was yesterday, when we were comfortable.

The person who adjusts the controls says that he has set the temperature at 80F, but the room is still cold.

Therefore, the problem must have something to do with the equipment. A careful examination reveals that the heating plant and controls are in good shape, but the gauge on the fuel oil tank registers zero. A call to the fuel oil distributor brings his truck in short order and soon we are achieving our desired output, comfortable occupants. (Sure — They are comfortable! They don’t have to pay for the heating oil.)

Now this is an absurdly simple example, but suppose our analysis of the cause-effect diagrams did not reveal the root cause. Usually this means that we have not been sufficiently thorough in our analysis. We began with the premise that temperature was the source of the discomfort. But if that were not the case, we could easily miss important factors in the analysis. This points out the need for careful problem definition.

It also happens that the analysis reveals several possible causes, and it is not clear if there is one or more of these causes that need to be addresses in order to solve the problem. This brings us to our second handy tool, the scatter diagram.

Scatter diagrams do not identify which variable is the cause of changes in the other variable. Sometimes, both variables are changing as a result of changes in a third, unidentified variable. Therefore it is usually best to develop and analyze the cause-effect

diagram first. We know from our simple example that changes in occupant comfort do not cause changes in room temperature, (at least not until someone adjusts the controls). 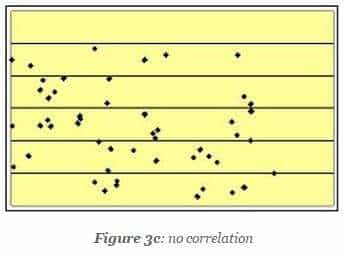 As an example, let’s say that we are investigating why particulate emissions are high and varying in a random fashion. From a cause-effect analysis we have identified variable fan speed as a possible cause.

Fortunately, we have daily data from the last fifty days on both indicated fan speed and lab sample particulate counts from the filter exhaust. The data and resulting scatter diagram show the situation more clearly.

What can we say about fan speed as a possible cause for variability in particulate levels? From the scatter diagram (Fig. 4), it is unclear what the precise nature of this relationship is.

It appears as a general rule that as fan speed rises, particulate counts rise. Because of the dispersion of the data, however, fan speed is probably not the only cause of this problem. We should keep looking.

Figure 4: fan speed and particulate count seem to have a positive correlation

We have explored Cause-Effect Diagrams, a very simple tool that can be used to improve business process performance. Any problem we are trying to solve can be viewed through a cause-effect diagram in order to understand the symptoms and responses. In order to solve a problem, we must find the root cause of the problem and eliminate that cause. It is only when you are addressing the root cause of a problem that you are truly solving the problem. Otherwise, you are only putting a band-aid on the problem and not really solving it at all, which mean the problem will reoccur again and require another fix. Eventually, you will have to address the root cause so why not do it right the first time!