A final audit report should be prepared using the FSMS Audit Report Example Template as a guide, documenting in detail the findings presented during the closing meeting. In addition to the items covered during that meeting, the Food Safety Audit Report will include each of the nonconformity reports generated during the audit, a brief description of any obstacles encountered, a statement of the confidential nature of the contents, and an appendix containing the audit plan and any checklists used and notes generated during the audit. When the FS1160-4 EXAMPLE FINAL AUDIT REPORT is complete and available, it is distributed as directed by Top Management. 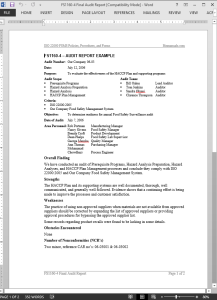